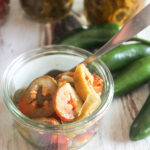 Pickled jalapeno peppers are spicy, zesty and  easy to make with only a few ingredients!