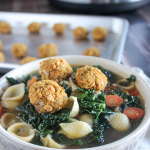 Don't let the long ingredient list scare you away from making this soup because it can be made in less than one hour. Here is what you will need to make this Tuscan vegetable soup: olive oil, onions, vegetable broth,  garlic, zucchini, carrots, tomatoes, lemon juice, chopped fresh greens, white beans, nutritional yeast, tamari sauce, oregano, whole wheat pasta, and a pressure cooker or soup pot.

This soup is so good!  I received  The Thug Kitchen Official Cookbook  as a gift recently and found a recipe for vegan wedding soup, which inspired me to make my own version.

The bean balls take the longest to prepare and cook, so I make them first and while they are cooking in the oven, I make the soup. By the time the bean "meatballs" are ready, the soup is too..

Unlike meatballs these bean balls are fragile and should not be added to the soup until you are ready to eat the soup.  I serve them on the side so that you can add as many as you like. Once they hit the soup they begin to fall apart and that's when the magic begins.  All of the flavors in the the bean balls spread throughout the soup.  They are so good, you will find yourself reaching for more  before your soup bowl is empty.

These little white bean balls really are flavor bombs, I usually double the recipe for the bean meatballs and serve them the next night with homemade marinara sauce over zucchini noodles.

Even though this bowl of hearty vegetable soup is a meal in itself, we like it with a side salad like this garden chopped salad. This soup can be made on top of the stove or in an pressure cooker, below are instructions for both.

Check out these soup recipes