This Chicken Murphy recipe is made with chicken and sausage combined with peppers and tomatoes.
Jump to Recipe Print Recipe 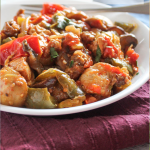 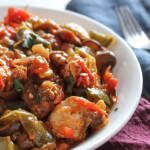 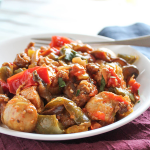 This Chicken Murphy recipe is a tasty chicken dinner that blends sausage and peppers with chicken and potatoes covered in a spicy tomato sauce. Perfect to serve at family gatherings.

If you are looking for a less spicy version of Chicken Murphy, try Chicken Giambotta, a similar, milder tomato-free chicken recipe.

Growing up in New Jersey, I was lucky to have been exposed to a variety of regional dishes. Chicken Murphy is one of those incredible dishes.

If you've never heard of it, Chicken Murphy is a popular dish served in traditional red and white checkered tablecloth Italian restaurants throughout New Jersey, and the most famous being the Belmont Tavern.

Despite its name, it is not an Irish recipe. It is an Italian recipe, and there are many opinions about how this Italian chicken dish was named "Murphy".

Some say it was the name of the person that invented this dish, (Murphy's chicken) others say it's because the Irish refer to potatoes as murphies.

Either way, you are going to love this recipe! I've been told many times this recipe for chicken murphy is the most authentic one.

This is an overview of the ingredients and steps to make this recipe; scroll down for a printable recipe card with exact measurements and detailed instructions.

As an Amazon Associate, I earn from qualifying purchases.

Equipment Needed to Make This Recipe

Here Is How To Make The Best Chicken Murphy

Get all of the ingredients ready: Cut the potatoes, onions and peppers into large pieces. Dice the garlic cloves and measure the tomatoes, pepperoncini and brine.

Preheat the oven to 350 degrees and heat olive oil over medium-high heat in a heavy skillet.

Once the pan is hot, add the sausage and cook until it begins to brown remove it from the skillet and set it aside to cool.

Next, brown the chicken breast meat until it begins to turn golden on the outside and remove it from the skillet.

Reduce the heat to medium heat, and saute onion and garlic for a few minutes just until they begin to soften. Remove them from the skillet and set aside with the meat.

Cook the bell peppers until they begin to turn soft, and remove them from the heat.

Place the mushrooms in the pan and cook for a few until they begin to turn soft and start to release some liquid. At this point, you can scrape the bottom of the pan to remove the brown bits.

Increase the heat to medium-high and add a little more oil. Place potatoes in the pan and cook in the hot skillet until they begin to turn golden brown on the outside and remove them from the heat.

By this time the chicken and sausage should be cool. Slice sausage links into thick chunks and chicken into bite-sized pieces. Add the sausage slices and chicken cubes back to the skillet or place them in a casserole dish.

Top the meat in the skillet with the green pepper, red bell pepper, onions, garlic and mushrooms.

Add the pepperoncini, diced tomatoes, and brine. Cover the pan and place it into the preheated oven and bake.

Note: This recipe takes time to make; each ingredient is quickly seared in a skillet separately. If you have a large skillet, you can saute the garlic, onions, peppers, and mushrooms together.

Chicken - Chicken murphy is typically made with boneless skinless chicken breasts or chicken cutlets. Chicken tenders can also be used as well as boneless chicken thighs.

Potatoes - Any type of potato can be used to make this recipe. We like yellow potatoes, red potatoes, or baby potatoes the best for their thinner skin. If you like to peel your potatoes, you can use russets too.

Some versions of Chicken Murphy are made without tomatoes. If you don't like tomatoes, you can add ½ cup of chicken broth instead.

Pepperoncini If you don't care for hot food, you can cut back on the number of pepperoncini or you can substitute pepperoncini with peppadew peppers or sweet cherry peppers.

Pepperoncini can be substituted with another type of hot pepper such as hot cherry peppers, banana peppers, or jalapeno peppers.

Sausage - Hot or mild pork, turkey, or chicken Italian sausage links can be used in this recipe.

How to make Chicken Murphy in a Slow Cooker

If you are short on oven space or it's too hot to turn on the oven, you can finish chicken murphy in a slow cooker.

Here's how: Once all of the ingredients have been browned on top of the stove, add them to the slow cooker and cook at low heat for 2 hours.

Set the slow cooker to warm until it is time to serve.

Tip! To avoid potatoes that fall apart, place them on top of the ingredients in the slow cooker and cook for 2 hours.

Chicken Murphy can easily be made ahead of time, here's how:

Brown all of the ingredients and place them into an airtight container. Store them in the refrigerator for up to 2 days.

To Serve, bring the browned ingredients to room temperature, and place them into an oven-proof dish or slow cooker.

Store leftover chicken murphy in an airtight container in the refrigerator for 3 to 4 days. Reheat leftovers in a covered oven-proof dish or on top of the stove over low heat.

Serve leftover chicken murphy in a sandwich in a crusty baguette or your favorite hard roll.

For another New Jersey favorite, try this Jersey Burger!

Leave out the sausage - If you don't like sausage, you can leave it out and add an extra ¼ pound of chicken.

Shrimp Murphy - Replace the chicken with shrimp which should be sauteed in garlic and oil and added to the murphy mixture just before serving.

Pork Chops Murphy - Replace the chicken with boneless pork chops and prepare following the recipe instructions in the card.

Chicken Murphy Pasta - Serve chicken murphy over your favorite pasta. You can cut back on the number of potatoes or leave them out if you are counting carbs.

Tomato-Free Chicken Murphy - Replace the tomatoes with a cup of white wine or chicken broth.

Serve chicken murphy with a hunk of Italian bread and a salad like this Spinach Salad with Basil, steamed green beans or Green Beans and Bacon, and a loaf of crusty bread.

What is chicken murphy?

You might be thinking from its name, that this recipe is an Irish recipe. Actually, it's an Italian-inspired recipe that is rumored to have originated at the Jersey Shore or New York City. As with most stew recipes, there are several variations. Some recipes are made with brown gravy, but we prefer the tomato version.

Why does each ingredient need to be browned separately to make chicken murphy?

Each ingredient is browned separately to avoid overcrowding the skillet. If your skillet is larger than 9 inches, you can brown the vegetables together in any combination that you like.

If I add more meat to chicken murphy, should the rest of the ingredients be doubled?

Yes, especially the tomatoes to keep the dish from becoming dry. Depending on the amount of meat added (up to a quarter-pound), you may not need to increase the vegetables.

Can I leave out the brine from the pepperoncini to reduce the amount of sodium in chicken murphy?

Yes! You can leave out the brine, however, you will lose some of the tart pickle flavors.
We have also made it with half the amount of brine (⅛ cup) and the pickle flavor was mild but it was still there.
You can also add 1 tablespoon of white wine vinegar (or more to taste) in place of the brine from the peppers.

If I don't dredge the chicken in flour, won't the sauce become watery?


The sauce will thicken from the starch of the potatoes,soe there is not need to dredge the chicken in flour unless you want to.

Here are comments and suggestions from people that have tried this recipe. The chicken and sausage can be cut before cooking it, I find it easier to cut the meat after it's been cooked. If you are short on time or have a large skillet, you can brown the vegetable ingredients together in any combination that you like.  Store leftover chicken murphy in the refrigerator in an airtight container for up to 5 days.