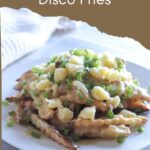 Disco fries, a New Jersey version of Canadian poutine is a popular dish served in New Jersey diners. They are also known as gravy fries, gravy cheese fries or diner fries and have been around since the disco days, back in the early '80s.

I'm from New Jersey and like to share regional recipes from my state, like this chicken murphy recipe and Jersey burger recipe. Since disco fries were one of my favorites before I cared about how I ate, I had to make a healthier version of this delicious disco fries recipe, a New Jersey diner classic.

This is an overview of the ingredients and steps to make this recipe; scroll down for a printable recipe card with exact measurements and instructions.

How to make this healthy disco fries recipe

Prepare: Rinse the potatoes and pat them dry, chop the onion. Shred the cheese if you are using a block of cheese.

Use a sharp knife or a crinkle cutter to cut the potatoes into uniform-sized pieces shaped like french fries.

Place the cut french fries into a bowl of cold water and let them soak for at least one hour.

While the potatoes are soaking, make the gravy. Heat olive in a pan over medium-high heat and cook the garlic for a few minutes until it begins to soften.

Reduce the heat to medium heat and whisk in the flour until it forms a thick paste.

Reduce to low heat, and gradually add the broth stirring constantly until the gravy thickens. Stir in the tamari sauce. Turn the heat to low to keep warm.

Drain and dry the potatoes. Place them into a bowl. Add the olive oil and toss.

Arrange the prepared potatoes in an even layer in an air fryer basket or air fryer tray leaving enough space between them to allow the air to circulate between them. Air fry for approximately 15 minutes.

Step 7. Remove from oven and assemble

Flip them over or give them a shake and air fry until golden and crispy approximately five minutes longer. Arrange the fries on a plate, pour gravy and sprinkle the shredded cheese or cheese curds.

NOTE: Cooking time can vary depending on your air fryer and the size of the potatoes. The fries are done when they are golden brown and crispy.

The complete list of ingredients to make this recipe is above. Below are notes about some of the ingredients, along with ideas for substitutes.

Potatoes - Russet potatoes are the best potatoes to use for frying and air frying. They are high in starch and low in moisture. If you don't have russet potatoes, the next best alternative would be Yukon gold potatoes.

You can cut your potatoes in any shape that you like which is another benefit of making your own fries. I've also air-fried potato slices and large wedges to make these. My favorite is thinner crinkle cuts, which are easy to make with this crinkle cutter.

Traditional disco fries are typically cut thick like steak fries. Since we like our fries crispy and thinner, I went with a smaller size, they cook faster and crisp up nicely.

Vegetable broth can be substituted with an equal amount of chicken broth or beef broth.

Cheese - Traditional disco fries are made with mozzarella cheese, but any kind of cheese works. Experiment with different cheeses, we like white cheddar, Colby jack, and cheese curds.

Tamari sauce - is a rich umami Japanese soy sauce. It brings all of the flavors of the gravy together. It can easily be substituted with an equal amount of soy sauce, coconut aminos, or Worcestershire sauce.

Serve disco fries as an appetizer (they are perfect for game day) or as a side dish with burgers, or grilled meat.

Another fun idea would be to make a disco fries bar. Serve plain fries on a platter and set out a station with gravy, cheese sauce, salsa, different cheeses, and toppings, and let everyone make their own disco fries.

How to store and use leftovers

This is a recipe that really doesn't do well leftover. The fries get soggy, but the flavor is still there. If you don't mind soggy fries and you have leftover disco fries, you can store them in an airtight container in the refrigerator for up to two days.

Reheat them in the oven or microwave.

These fries really are a blank slate. You can add any combination of ingredients to come up with your own version. Here are some suggestions.

Vegan Disco Fries - Use vegan cheese or sprinkle a tablespoon or two of nutritional yeast on top of the fries.

What is the purpose of soaking the potatoes before cooking them?

Soaking the potatoes before cooking them in an air fryer will draw out some of the starch which will help make the fries crispy.

Do potatoes need to be peeled before air frying them?

That is up to you. Potato skins are the most nutritious and flavorful part of the potato, so it's okay to not peel them.

Can the potatoes be cooked in a regular oven instead of an air fryer to make french fries?

Yes, they can. Arrange the potatoes in a single layer on a parchment-lined baking sheet, and don't overcrowd the pan. Place them into a preheated 425-degree f oven and bake for 10 minutes. Flip the potatoes over and bake until the fries are golden and crispy; about 8 to 12 minutes longer. 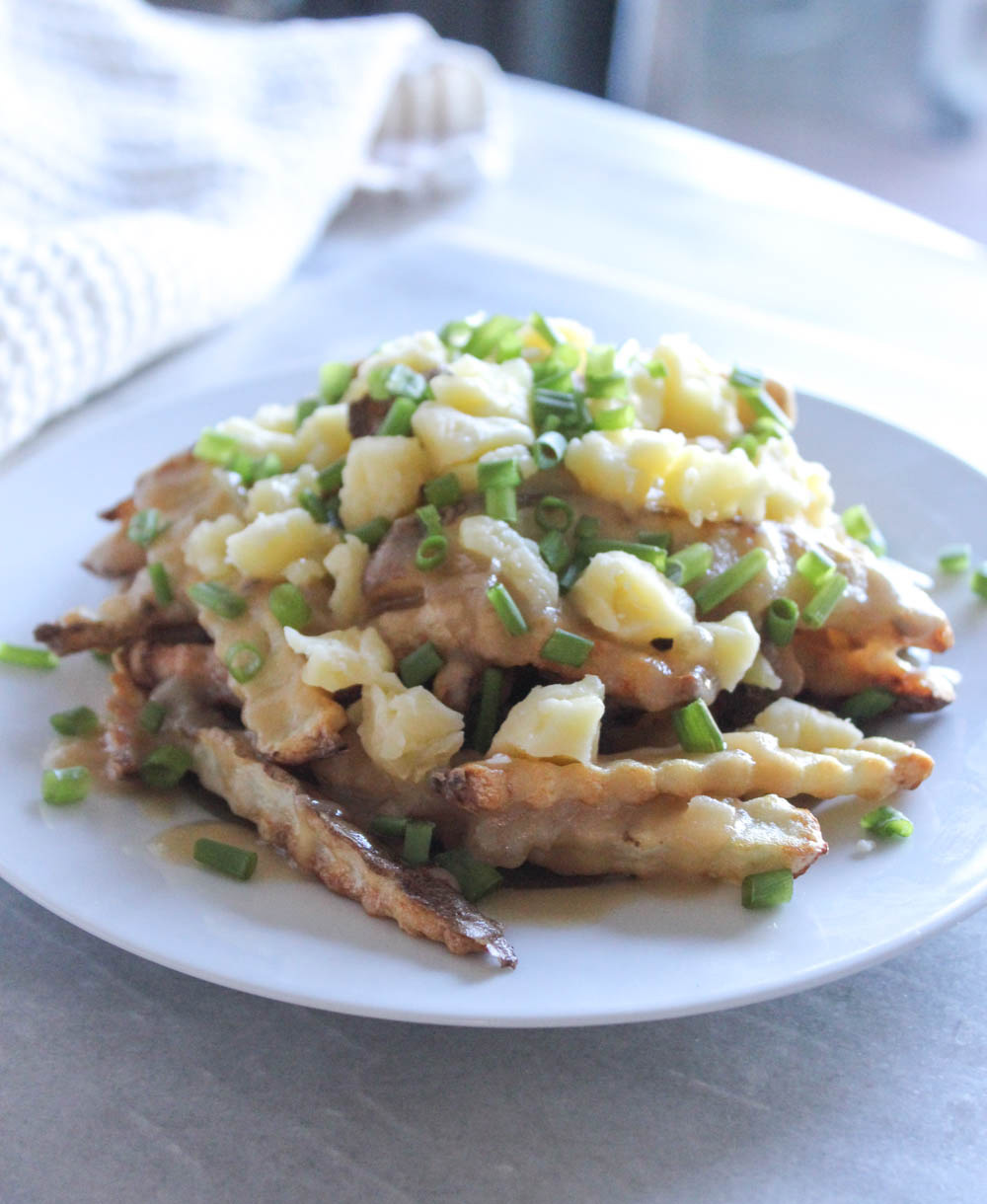