Shredded chicken is an easy healthy protein that is perfect to have on hand for a quick dinner or to toss into salads, stir fry recipes, sandwiches, tacos, nachos or soups.

As an Amazon Associate, I earn from qualifying purchases

Equipment You Will Need to Make Shredded Chicken

Depending on your cooking method, here is a list of suggested equipment you might need to make shredded chicken. Unless you try each way, you won't need all of these.

How to Make Crockpot Shredded Chicken

Place the chicken breasts into the slow cooker and season them with salt and pepper. Add just enough water to cover the bottom of the crockpot.

Cover the slow cooker and cook the chicken on low heat for three to four hours. The cooking time can vary depending on your slow cooker. The meat should be cooked through to 165 degrees F.

Total Estimated Time to Make This Recipe: 3 to 3 ½ Hours

How to Make Shredded Chicken in an Instant Pot

Secure the lid and set the Instant pot to high for 10 minutes. Once the cooking time is over, let the pressure release naturally which will take about 8 minutes longer.

The Instant Pot chicken, like the Crockpot version, is moist and tender, but the chicken had more shrinkage than the other methods. If you are looking for a quick way to cook shredded chicken that is juicy and tender, this is it!

Total Estimated Time to Make This Recipe: 20 to 30 Minutes

How to Make Shredded Chicken on the Stovetop

Arrange the boneless chicken breasts in a saucepan, season them and add enough water to cover the bottom of the pan.

Cover the pan and cook over medium heat for 25 minutes

Total Estimated Time to Make This Recipe: 30 to 40 Minutes

How to Make Shredded Chicken in the oven

Preheat the oven to 350, and add the chicken to a casserole dish, season it and add enough water to cover the bottom of the dish.

Cover the dish and place it in the oven for 30 minutes.

Total Estimated Time to Make This Recipe: 30 to 40 Minutes

The shredded chicken is not as tender when cooked in the oven, but still flavorful. It's a good choice if you are already cooking something in the oven. Try brushing on a few teaspoons of olive oil or melted butter for extra moisture.

Water. If you prefer more flavor, an equal amount of chicken broth or chicken stock can be used in place of the water and omit the salt.

Since shredded chicken is a blank slate and can be used in so many recipes, I like to use minimal seasoning when I make it. If you prefer shredded chicken with more flavor, you can add a pinch of your favorite dried herbs to the water such as, thyme, sage, dill, basil, oregano, garlic powder or onion powder.

To avoid soggy shredded chicken, do not cover the chicken entirely with water.

Do not place the chicken breasts on top of the trivet in the instant pot. Remove the trivet, and place them into the water so that they stay moist and flavorful.

Allow the chicken to sit for at least 10 minutes before shredding it which will allow it to cool and the juices to redistribute through the meat.

How to Shred Chicken

Some people like to shred chicken using a stand mixer with a paddle attachment or a hand mixer. It's pretty straightforward; you place the chicken into a mixing bowl and mix at low speed until the chicken is shredded to the size that you want. This method makes more sense for shredding large batches of chicken.

I make smaller batches of shredded chicken, and I like the simplicity of the fork method for shredding chicken or I use my hands; it is the easiest way. It only takes a few minutes and you have more control over the sizes of the shreds.

Whichever way you choose to shred your chicken, allow the chicken to cool off before shredding.

How to Store, and Freeze Shredded Chicken

How to Store Shredded Chicken

Store shredded chicken in the refrigerator for three to four days in an airtight container.

How to Freeze Shredded Chicken

Measure the shredded and cooled chicken into serving portions which makes it convenient for weekly meal prep or making smaller recipes. Place the chicken shreds into an airtight container, freezer bag or a freezer-safe reusable bag for up to four months.

Thaw out frozen shredded chicken in the refrigerator overnight.

The Bottom Line, what is the best way to cook chicken for shredding?

In my opinion, the most flavorful and moist shredded chicken comes from cooking the chicken in the Crockpot or Instant Pot. I was pleasantly surprised at how moist the chicken was and my favorite way, as long as I have the time is the slow cooker.

If you don't have an Instant Pot or a Crockpot, the next best way is the stovetop, and the oven method my last choice. The oven-cooked chicken was not as tender and juicy as the other methods.

Pour enough water into a slow cooker so that it just covers the bottom of the slow cooker. Add the chicken, sprinkle with salt and pepper,

Cover the slow cooker and cook on low for 3 hours, chicken should be at least 165 degrees internal temperature. If not, place the cover back on and cook for an hour longer.

Once the chicken is fully cooked, remove it from the crockpot and let it cool for 5 to 10 minutes and shred it with two forks.

Place the chicken into the Instant Pot along with enough water to cover the bottom of the pan; sprinkle with salt and pepper.

Cover the Instant Pot and set the chicken to cook at high for 10 minutes. After the cooking process, allow the pressure to release naturally for about 5 to 10 minutes longer.

Carefully remove the cover, let the chicken cool off for 5 to 10 minutes and shred it using two forks.

Place the chicken into a saucepan along with enough water to cover the bottom of the pan; sprinkle with salt and pepper.

Cover the saucepan and cook it on top of the stove on medium to low heat for 25 minutes, check the internal temperature which should be 165 degrees.

Place the chicken into an ovenproof dish along with enough water to cover the bottom; sprinkle with salt and pepper.

Cover the dish and place it in the oven for 30 minutes. Check the internal temperature which should be 165 degrees.

Once the chicken is cooked through, remove the chicken from the oven and let it cool off for 5 to 10 minutes before shredding it.

Allow the chicken sit for about 5 to 10 minutes before shredding it which will allow it to cool and the juices to redistribute through the meat.

Welcome to Simple and Savory where you will find easy, no fuss and DELICIOUS recipes made with wholesome every day ingredients. More About Me.... 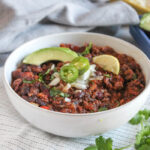 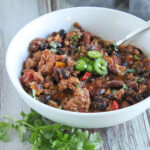 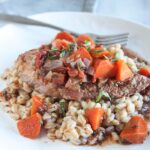 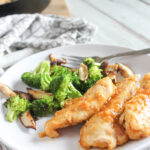 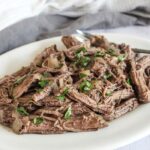 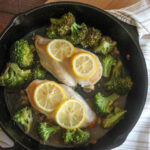