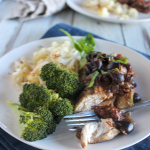 This Mediterranean chicken recipe will become your new favorite slow cooker chicken recipe.  It’s full of flavor and is perfect for quick-prep dinner that can be made in a slow cooker, or if you are pressed for time, a pressure cooker.

You will love the way that the briny olives combine with the sun-dried tomatoes which add a hint of sweetness. The end result is tender chicken that is topped with a seriously flavorful chunky sauce.

As an Amazon associate, I earn from qualifying purchases

Here is how to make Mediterranean Chicken in a Slow Cooker

Add the chicken to the slow cooker.

Place the sun-dried tomatoes, olives, garlic and onions on top of the chicken.

Add the oregano and pour in the broth or wine.

Cover and cook on low for 2 ½ hours. Remove the chicken from the slow cooker and thicken the sauce with flour mixed with water.

Short on time? Make it in a Pressure Cooker

To make Mediterranean chicken in a pressure cooker, you would follow the same steps as above, up to the cooking time.

To cook it, set the Pressure cooker to medium and cook for 10 minutes. Slow-release the pressure, remove the chicken, thicken the sauce and serve.

Total Estimated Time to Make This Recipe: 35 to 45 Minutes

Serve Mediterranean chicken with a side of your favorite roasted vegetables, or green beans and a helping of mashed potatoes, farro or rice.

Chicken – The best cut of chicken to use in this recipe is boneless breasts or thighs. The breasts are leaner and will cook a little quicker.

Kalamata Olives add a wonderful briny flavor to this dish, however, if you don’t like kalamata olives, you can substitute them with regular black olives or leave them out completely.

Chicken Broth – Can be substituted with a cup of white wine.

Flour can be substituted with arrowroot for a gluten-free version

How to Store Leftovers

Store leftover Slow Cooker Mediterranean Chicken in the refrigerator for up to four days in an air-tight container.

Reheat it in the oven covered at 350 until it is heated through, or in the microwave.

Freeze it – I have not tried to freeze Mediterranean chicken so I can’t recommend freezing it.

Add in ½ cup of quartered artichoke hearts or a few tablespoon of capers during the last half hour of cooking.

Substitute the chicken for a one pound pork tenderloin.

Check out these easy chicken recipes that you might enjoy

For a gluten-free version, substitute the flour with an equal amount of arrowroot to thicken the sauce just before serving. 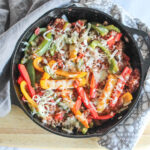 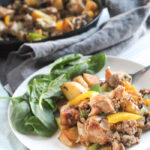 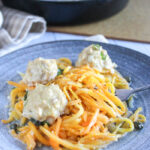 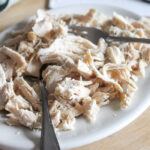 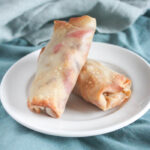