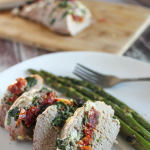 Hasselback Pork Tenderloin is a delicately flavored pork tenderloin stuffed with spinach, feta, and sun-dried tomatoes. It looks elegant, tastes great, and cooks quickly. It's  perfect for guests or a last-minute weeknight meal that is gluten-free and low-carb.

Pork tenderloin is a tender cut of pork that is lean, juicy and flavorful. It  cooks up perfectly on the grill, and the oven.  It is a lean cut of pork and it will cook even more quickly in the oven and can dry out.  The addition of the vegetable filled stuffing in this recipe adds moisture allowing for the meat to stay tender and juicy.

Click Here To Pin This Recipe for Hasselback Pork Tenderloin

Just a few fresh and simple ingredients are necessary to make this recipe, here is what you will need:

This recipe comes together quickly.  It can be made ahead of time and stored in the refrigerator and brought to room temperature just before popping it in the oven.

More Pork Recipes For You: