Boneless tender pork chops are seared on top of stove, then finished in the oven with spicy cherry peppers and vinegar.
Jump to Recipe Print Recipe 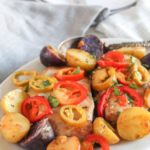 This pork chops with vinegar peppers and potatoes recipe is so good! It's made with tender pork chops that are seared on top of the stove, then finished in the oven with spicy cherry peppers in vinegar. It's full of flavor and easy to make.

This pork chop dinner recipe is almost a one-pan dinner. Serve it with a side of sauteed broccoli rabe for a meal that can be on your table in less than one hour!

Here Is What You Will Need

This is an overview of the ingredients and steps to make this recipe; scroll down for a printable recipe card with exact measurements and instructions.

Prepare the ingredients: wipe the potatoes clean with a damp towel and cut them in half, chop the garlic cloves and measure and slice the cherry peppers, season pork chops with salt and pepper, and pat them dry with a paper towel.

Fill a medium-sized saucepan halfway with water, add the potato halves. Cover the saucepan and bring the water to a boil until the potatoes begin to turn soft. Drain, rinse them and set them aside.

While the potatoes are cooking, heat olive oil over medium-high heat in a skillet. Once the oil is hot, place pork chops and cook chops for approximately 1 to 2 minutes on each side until they turn golden brown. Remove them from the pan.

Add the cooked potatoes to the skillet with the garlic and toss over medium heat while scraping up brown bits on the bottom of the pan. until the garlic starts to soften and the potatoes start to brown.

Step 5. Add the pork chops back to the pan

Once the garlic begins to soften, transfer the pork chops back to the skillet, add the cherry peppers and reserved vinegar. Bake uncovered (about 10 minutes) until the pork is cooked through - 145 degrees F.

Cook time in the oven can vary depending on the thickness of the pork chops. To avoid overcooked pork, check the temperature of the meat after it's been in the oven for 10 minutes and continue to check until chops reach 145 degrees F.

Boneless pork chops can be substituted with bone-in pork chops or even a pork tenderloin in this recipe.

Cherry Peppers. We like hot cherry peppers in a jar in this recipe, and they can be replaced with an equal amount of sweet cherry peppers or peppadew peppers for a milder version of pork chops with vinegar and peppers.

Baby potatoes can easily be replaced with chunks of yukon gold or red potatoes.

What to Serve with Pork Chops with Peppers and Potatoes

Add fresh herbs. For a fresh-tasting version of pork chops with vinegar peppers, add a sprig of fresh rosemary or thyme before baking the pork chops and garnish with fresh oregano or fresh basil.

Change up the vinegar. Instead of using vinegar from the jarred peppers, try using an equal amount of balsamic vinegar, red wine vinegar or white wine vinegar.

How to Store Leftover Pork Chops with Cherry Peppers and Potatoes

Refrigerate leftover pork chops with peppers and potatoes for up to three days in an airtight container.

Reheat the leftovers on top of the stove or in the oven until heated through. 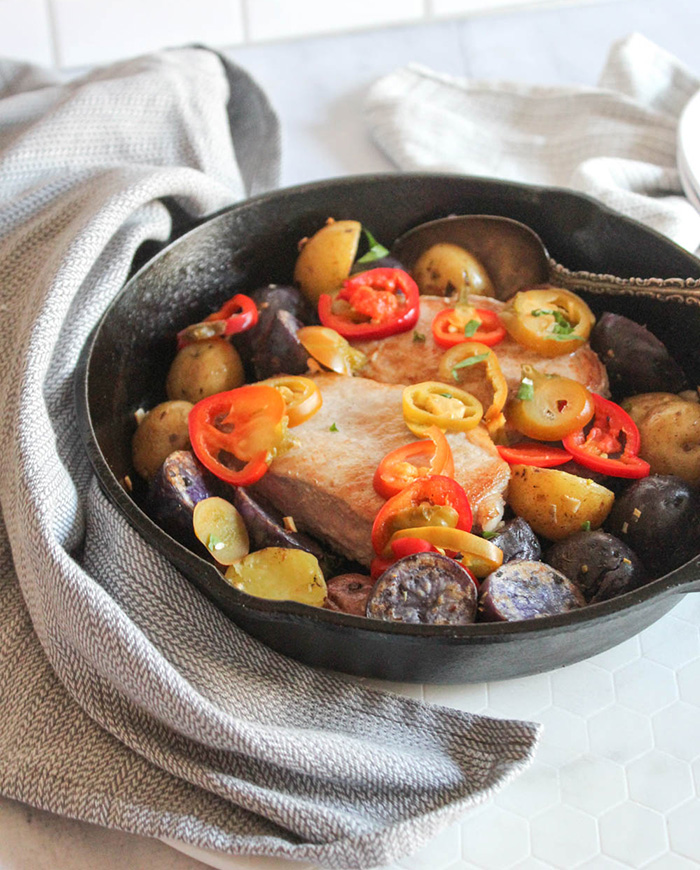 Pork chops with Peppers and Potatoes

This recipe serves 2, double the ingredients for four servings. Store leftovers in the refrigerator for up to three days. Reheat leftovers on top of the stove or in the oven. Tips Meal Prep tip, boil the potatoes up to two days ahead of time and store them in the refrigerator until it's time to make this recipe. For a golden brown sear, pat the pork chops dry with paper towels before adding them to a hot skillet.