Deliciously filling nachos are made with thinly sliced potatoes as a base and then topped with vegetables and beans. They are vegetarian and gluten free.
Jump to Recipe Print Recipe 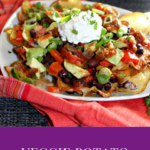 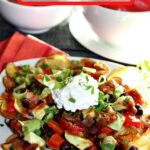 Veggie potato nachos are a tasty twist on traditional nachos. They are made with a base of thinly sliced potatoes that have been baked until crispy and topped with vegetables wrapped in Mexican spices.

Potato nachos, also known as Irish nachos are typically made with thin slices of potatoes, melted cheese and bacon. This version is a healthier version made with a Tex-Mex flair.

Veggie potato nachos are not only perfect for an appetizer, they are also a great solution for a quick vegetarian dinner with ingredients you probably already have.

This is an overview of the ingredients and steps to make this recipe, scroll down to see ingredient notes and substitutions as well as a printable recipe card with exact measurements and complete cooking instructions.

As an Amazon associate, I earn from qualifying purchases

Here is How To Make Potato Nachos with Vegetables

Line a baking sheet with parchment paper and brush it with olive oil. Arrange the potato slices onto the baking sheet and bake them for 10 minutes.

Note: An air fryer can also be used to prepare the chips which will yield even crispier chips. Here is my recipe for air fried potato chips.

After 10 minutes the potato slices will begin to turn golden, flip them over and cook them until they are crispy and begin to brown, about 5 to 10 minutes longer.

TIP! Keep an eye on the potato slices at the end of the cooking cycle (they can burn fast), Remove them as they brown, some may take longer than others to cook.

Cook the vegetables on top of the stove.

Add the beans, cumin and water; cook for 10 minutes on low.

Assemble the nachos: arrange the potato slices on an oven-proof dish. Top them with the bean and vegetable mixture and shredded cheese.

Place the nachos under a broiler to melt the cheese and serve.

Potatoes. Any type of potato will work in this recipe. We like to use russet, yukon gold or red potaotes.

Bell Peppers. Any color of bell pepper can be used in this potato nacho recipe. Use all of the same color or mix them up.

Jalapeno Pepper. If you don't like spicy nachos, you can leave it out.

Freezing veggie potato nachos is not recommended, they will become extremely soggy.

Garnishes. These are completely optional and can be left out, use one or use all of them. You can also make a batch of guacamole to serve with these too.

This veggie potato nacho recipe is so versatile! You can add any toppings that you like to the crispy potatoes. Here are some suggestions:

Vegan Potato Nachos. Leave off the cheese and drizzle on some homemade vegan queso or add a few teaspoons of nutritional yeast to the bean mixture.

Add Meat. Use shreded chicken or pork or chili in place of the beans on your nachos

Store leftover potato nachos in the refrigerator in an airtight container for up to 3 days.

Reheat them in the oven at 375 until they are heated through. The leftover chips will not be as crispy as when they are fresh. 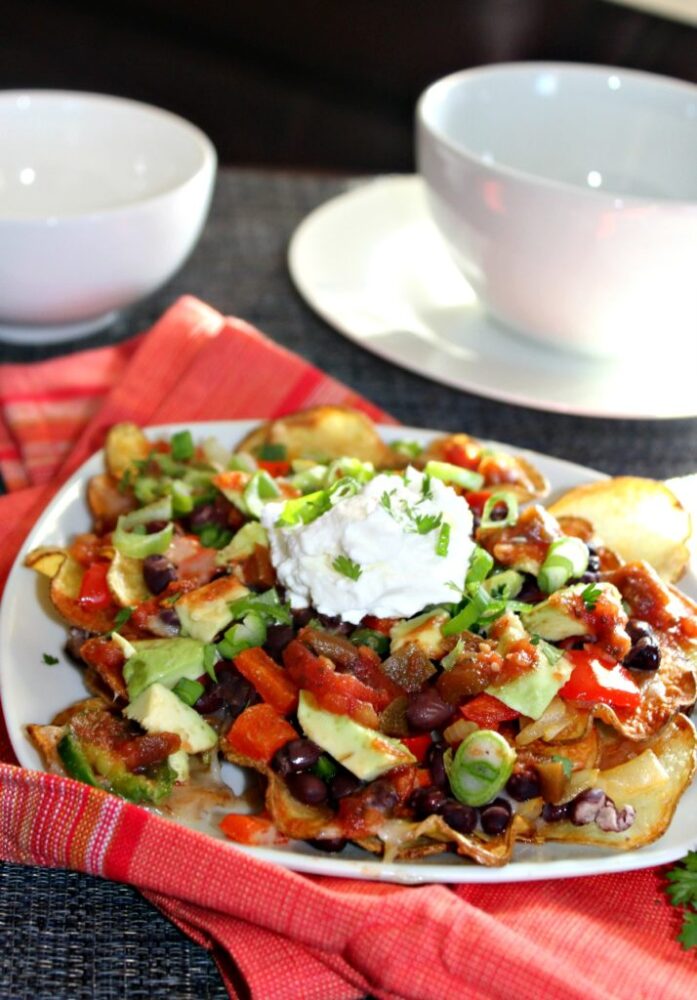 Deliciously filling nachos are made with thinly sliced potatoes as a base and then topped with vegetables and beans. They are vegetarian and gluten free.
Print Recipe Pin Recipe Rate Recipe
Prep Time: 20 minutes
Cook Time: 40 minutes
Total Time: 1 hour

This recipe serves 2 for dinner and 4 to 6 as an appetizer Vegan version - Use vegan cheese, nutritional yeast or vegan queso in place of cheese Meat Version Replace black beans with chili or shredded chicken or pork